On April 3, 1955, Elvis was pulled over by Louisiana State Trooper Nolan F. Strange while driving his 1954 pink Cadillac at 80 mph, which was 20 mph over the speed limit. Elvis was driving on highway US 171 in Caddo Parish, just outside Shreveport. 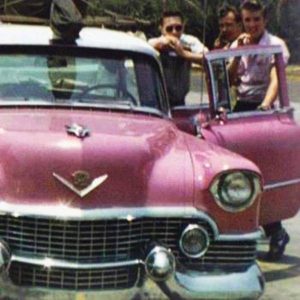 Elvis had performed in Shreveport on the Louisiana Hayride the previous day, alongside Slim Whitman, and was probably heading back to Mississippi for his April 7th performance in Corinth, MS.

With him at the time of his arrest were Bill Black and Scotty Moore.

Elvis had to pay a $25 bond to get out of jail, which was forfeited on April 5th, when he was due to appear in court.

Below you will find five documents related to his arrest:

These documents are all transcribed below and the originals can be viewed in PDF format below the transcriptions.

STATE OF LOUISIANA
VERSUS
ELVIS A. PRESLEY (WM)

State of Louisiana—Parish of Caddo

BEFORE ME, the undersigned authority, Judge of the District Court, Caddo Parish, State of Louisiana, personally appeared the undersigned affiant, who, being duly sworn, says that ELVIS A. PRESLEY on or about the 3rd day of April 1955, in the parish aforesaid,

unlawfully did operate a passenger motor vehicle along and on the public roads, highways and bridges of the State of Louisiana at a rate of speed greater than 60 miles per hour outside of towns and unincorporated villages

in violation of the law and against the peace and dignity of the State of Louisiana, and therefore affiant prays that the aforesaid accused may be arrested and dealt with according to law.

Sworn to and subscribed before me this 4th day of April, 1955

charged with Speeding 80 MPH has this day made bond

Notified to appear on arraignment on Tues. April 5th 1955

While on TVT, Patrol US171 Caddo Parish I noticed a whilte/pink 54 cad. Approach at a high Rate of Speed. I turned around and followed him for 8 miles at speeds of 65 to 80 mph. Stopped Vehicle and found operator to be above subjc. Subj. carried to caddo Jail to Post Bond, on above charges

Name [none] Address [none]

While on TVT Detail working South on US 171 Caddo Parish I noticed the above described veh. approaching at a high rate of speed. I stopped, turned around, and gave chase following subj. for 9 miles at 80 MPH. I stopped same and found it to be operated by the above described subj. Subj. was carried to Caddo parish jail to post Bond on above charges. Arrest Ticket #234809.

In this case, the accused, Elvis A. Presley, having failed to appear as he was bound to do before the Honorable Judge of the First Judicial District Court, Parish of Caddo, State of Louisiana, was on the 5th day of April, 1955, called in a loud and audible voice at the Courthouse door and failing to appear, he was again called three times at the Courthouse door, and ordered to come into Court and answer to the charge of Speeding Automobile, and notified that upon failure to comply with said order, his bond would be forfeited; and he, the said Elvis A. Presley, defendant, still failing to appear or answer, Elvis A. Presley, as the surety on his CASH BOND was on the 5th day of April, 1955, three times called at the Courthouse door, in a loud and audible voice and notified to produce instanter in open court the body of Elvis A. Presley, his principal, and he the said Elvis A. Presley, as surety, having failed to answer or comply with the notification or order, and the bond being offered and filed in evidence, on motion of Edwin L. Blewer, District Attorney:

IT IS FURTHER ORDERED, ADJUDGED AND DECREED that J. H. Flournoy, Sheriff, deliver any check, cash or other security that may be deposited with him as bail in the above numbered and entitled cause to the Treasurer of Caddo Parish, after deducting therefrom and paying all commissions duly authorized by law.