In a ceremony at Graceland on March 27, 2006, Graceland Mansion was officially recognized as a National Historic Landmark. Present at the ceremony were Priscilla Presley and Gale Norton, United States Secretary of the Interior (2001–2006).

Graceland was previously placed on the National Register of Historic Places in 1991. The “National Historic Landmark” designation is the United States’ highest designation for historic properties.

MEMPHIS, Tenn.-Interior Secretary Gale Norton joined Priscilla Presley today in announcing the designation of Graceland, home of the king of rock ‘n’ roll Elvis Presley, as a National Historic Landmark. Norton made the announcement during a special ceremony on the grounds of Graceland Mansion in Memphis, Tennessee.

“It didn’t take Americans and the rest of the world long to discover Elvis Presley,” Norton said, “and it is abundantly clear that they will never forget him. His popularity continues to thrive nearly 29 years after his passing, with each new generation connecting with him in a significant way.” 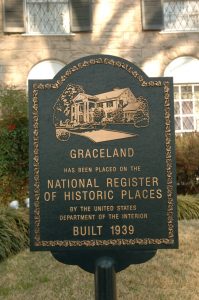 Elvis Presley, known throughout the world by his first name, is widely regarded as one of the most influential figures of 20th century music and popular culture, and his status as a cultural icon appears ever stronger as time goes by. His extraordinary talents produced achievements that remain unparalleled in American and world history. The international superstar was an accomplished and influential artist in several genres of music – rock, pop, country, R&B and gospel – and he triumphed on television, the concert stage and the silver screen. Elvis has been inducted into the Rock and Roll Hall of Fame, the Country Music Hall of Fame and the GMA Gospel Music Hall of Fame – the only artist with the distinction of being honored by all three.

It is estimated that Elvis Presley has sold more than one billion records worldwide.

“In recognition of Elvis Presley’s achievements and contributions to American culture and musical history, today we designate his home Graceland as a National Historic Landmark,” Norton said. “This is our nation’s highest recognition for historic properties.”

Graceland was Presley’s primary residence for 20 years of his 23-year career and is the one site most associated with him. Elvis Presley’s Graceland is one of the five most visited home museums in the United States and the most recognizable residence in the nation after The White House. Since its opening to the public in 1982, millions of fans from around the globe have toured Graceland and its ancillary attractions.

“American culture and music changed irreversibly because of Elvis,” said Norton. “It would be difficult to tell the story of the 20th century without discussing the many contributions made by this legendary, iconic artist.”

The National Historic Landmark designation is the highest such recognition accorded by our nation to historic properties. These special places are the actual sites where significant historical events occurred, or where prominent Americans worked or lived, and represent the ideas that shaped our nation. Fewer than 2,500 historic places carry the title of National Historic Landmark.

“Elvis loved Graceland and was so proud of it,” stated his former wife, Priscilla Presley. “This home was his private corner of the world that he shared with his family and his closest friends. To him, having Graceland also was a tangible symbol of how far he had come from his very humble beginnings. Elvis would be honored and moved to know his beloved home is now recognized as a National Historic Landmark. On his behalf I am truly grateful to Secretary Norton and the Department of the Interior and all who contributed to making this recognition occur. ”

“Graceland is my childhood home and it holds so many great memories of the time I shared there with my father, our family and our friends,” said Lisa Marie Presley, daughter of Elvis and Priscilla Presley and sole owner of Graceland Mansion. “Graceland has come to mean so much to Elvis fans around the world, millions of whom have visited and millions more who look forward to doing so. It is my honor to have shared it with my father’s adoring public all these years and I am committed to ensuring that it will be preserved forever for all future generations of fans and of my family to enjoy. This landmark designation comes purely due to the fact that the legendary Elvis Presley called Graceland home. It’s a significant statement about how much my father has meant to the world and it only makes me prouder of him.”

Transcription of the Resolution

Mr. FRIST (for himself and Mr. ALEXANDER) submitted the following resolution; which was considered and agreed to:

(2) is intimately connected to the musical and cultural heritage of Elvis Aaron Presley;

Whereas Elvis Presley is—

(1) universally recognized as the “King of Rock and Roll”;

(2) known to generations by only his first name; and

(3) widely agreed to be one of the most famous and influential American cultural icons of the 20th century;

Whereas Elvis Presley, having drawn on musical traditions including gospel, country, and rhythm and blues, contributed to the development, popularization, and evolution of the rock and roll genre;

Whereas Elvis Presley, having been an exceptionally talented vocalist and stage performer, experienced a career marked by unprecedented professional success and achievement;

Whereas Elvis Presley received numerous honors and accolades, including—

(3) a Grammy Lifetime Achievement Award from the National Academy of Recording Arts and Sciences;

(1) achieved over 150 gold, platinum, or multi-platinum awards; and

Whereas Elvis Presley is the only artist to be inducted into 3 major music halls of fame, including—

Whereas Elvis Presley continues to maintain a preeminent position on numerous Top Artist Achievements lists, including—

Whereas Elvis Presley was personally involved in the renovation and reconstruction of Graceland, and the unique design and decoration of Graceland enshrines his style, character, influence, and cultural legacy;

Whereas Graceland serves as a museum for promoting, celebrating, and maintaining the role of Elvis Presley in the history of the United States;

(1) is a historic residence built in the Classical Revival style; and

(2) was placed on the National Register of Historic Places in 1991;

Whereas Graceland continues to serve as a pilgrimage site for millions of Elvis Presley fans from around the world;

Whereas Graceland is recognized as one of the most visited historic house museums in the United States, attracting over 600,000 visitors each year; and

Whereas Graceland will continue to impact the popular culture of the United States by educating millions of visitors for years to come: Now, therefore, be it

Resolved, That the Senate—

(1) recognizes Graceland as exceptionally valuable for promoting and illustrating the contributions of Elvis Presley to the music and popular culture of the United States;

(2) acknowledges the importance of designating Graceland as a National Historic Landmark for the purposes of recognizing and preserving that unique cultural attraction; and

(3) congratulates Graceland on the occasion of its designation as a National Historic Landmark.

Note: The resolution begins at the bottom-right corner of Page 1 of the PDF below

Contract for the Purchase of Graceland (1957)